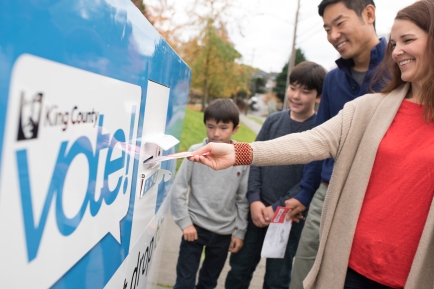 King County’s action to quadruple the number of ballot boxes this year proved to be really popular among voters. More than half of the ballots returned during the General Election were dropped off at a ballot box, a sharp increase from previous elections.

With strong support from King County Executive Dow Constantine and funding provided by the Metropolitan King County Council, Elections Director Julie Wise increased the number of drop boxes located across the county, from 10 to 43.

The new drop box locations were selected based on criteria that included geographically isolated or culturally distinct communities as well as areas that have lower than average voter registration rates. Working with King County’s Office of Equity and Social Justice, Elections evaluated more than 100 locations.

The new drop boxes were installed in two phases: 19 locations were added for the 2016 Primary and an additional 14 opened for the General Election. King County Council members, the Executive and local officials celebrated the openings by hosting ribbon cutting ceremonies at several locations, including the Kingsgate Library in Kirkland and the Lake City Library in Seattle.

King County Elections will continue to evaluate locations for additional drop boxes, particularly in communities that have historically been underserved.